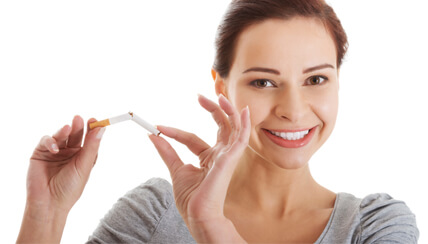 I had a neighbor who was 80 years old who had quit smoking many years earlier. When I asked him how he did it, he said he just decided to not smoke anymore and that he didn't have any withdrawal symptoms or side effects either. As our conversation continued, it turned out that for many days prior to him quitting, he kept picturing himself as a non smoker. He pictured his home as one without ash trays or lighters. He wasn't sick of his house or his clothes or his breath stinking like a filthy ash tray. He couldn't care less about how cigarettes affected his health and the health of others around him. He didn't want to hear anything about statistics. He said he just couldn't see himself as a smoker anymore.

Statistically, only 2% of people who want to quit smoking do so exactly like my neighbor did in the above paragraph. Again, statistically, only 2% of people who go to a hypnotist to quit smoking do so in their very first session. This is because, before they went to a hypnotist, for many days, weeks or months, they had changed the picture in their mind from an addicted smoker to a nonsmoker. And all they needed from the therapist was a little nudge in the direction they had already mentally taken.

The majority of people who go to a therapist in order to eliminate an addictive habit need additional sessions. Hypnosis is not a one visit, quick cure-all for whatever ails you. In order for any therapy to be effective, you need to meet the therapist halfway. You need to show that you are doing your part in eliminating your addiction.

When it comes to quitting smoking, that means to leave your cigarettes and lighter at home and to not have either in the car as well. You can't just walk up to a therapist with a cigarette in your mouth, throw it on the ground and say "okay, now get me to quit smoking." By leaving the cigarettes at home, you have already begun to change the picture in your mind from an addictive smoker to a nonsmoker. It is only then that the therapist can be truly effective.

1. Smoking cuts the oxygen supply to the brain by at least 50%.

3.  Emphysema, bronchitis, asthma, lung cancer and tuberculosis have all been linked to smoking.

4.  Disruption of circulation to the extremities, the degree that blotches of dead tissue are visible, has been connected to smoking.

5.  The tar from cigarettes irritates the stomach lining.

6. Smokers are difficult to anesthetize and can develop a fatal spasm when administered an anesthetic.

8.  Smoking can cause kidney or pancreatic disturbances.

11. If you smoked a pack of cigarettes a day for fifteen years, you’d absorb the equivalent of an 8-ounce glass of tar.

12.  A one-drop injection of nicotine would kill you immediately.